Inside Iraq's 7,000 Year History of War, Profit, and Conflict

Banking on Baghdad is the first history of Iraq presented in a global context. Woven through the boardrooms and war rooms of London, Paris, Berlin, Istanbul, Washington, and the other centers that set the agenda for its tragic history, Black has pieced together the corporate hegemony, oil politics, religious extremism, Nazi alliances, and intersecting global upheaval—all with a compelling, contemporary perspective.

Now, with foreign troops once more occupying the “cradle of civilization,” Banking on Baghdad gives us the opportunity to consider the present and future of Iraq through the lens of its complicated and turbulent history. While demonstrating that Iraq's tribal, religious, and political turmoil has combined to punish the nation, Black does not shy away from the uncomfortable truth that foreign governments—including our own—have played a defining role in creating the Iraq we know today. With his trademark mix of deeply mined history and investigative journalism, Black documents a long record of war profiteering in Iraq and takes a hard look at the corporations currently doing business there. With access to numerous oil company archives, the papers of a half dozen governments, and numerous other primary sources yielding some 50,000 documents gathered by an international team of some 30 researchers, Banking on Baghdad promises to tell a monumental story 7,000 years in the making. Banking on Baghdad was submitted by editors for the Pulitzer Prize.

Vivid characters bring Banking on Baghdad to life. The followers of Islam consumed Iraq as the epicenter of a struggle between the minority Shiites and the Sunnis. The Mongol chieftain Hulagu utterly destroyed Iraq, but its remnant later came back to life. Winston Churchill solidly set the course of British petropolitics and military oil dependence on a collision course with Iraq and Iran, as the government-controlled company that became British Petroleum literally invented the geopolitical Middle East. During World War I, the British invaded Iraq for the oil they knew one day would be indispensable to all industry and militaries. C. S. Gulbenkian, the legendary Mr. Five Percent, through intrigue and high-drama created the Red Line Agreement monopoly, dividing Iraq's fabulous oil wealth between British, American, and French cartels. The Hashemites, from Sharif Hussein and King Faisal to his brutally-murdered progeny, fought alongside Lawrence of Arabia to achieve independence in Syria, but were given Iraq instead; in consequence the Arabs aborted a planned peaceful co-existence with Israel. The Mufti of Jerusalem, in his war against Zionism, using Iraq's oil and strategic location as bait, sealed an alliance with Hitler during World War II and lead a pro-Reich coup in Baghdad met by a British invasion to oust it. The post-World War II Ba'ath predecessors of Saddam Hussein ravaged Iraq's minorities and paved the way for the deposed—and eventually deceased—tyrant.

After Banking on Baghdad, no reader will ever see Iraq the same way. 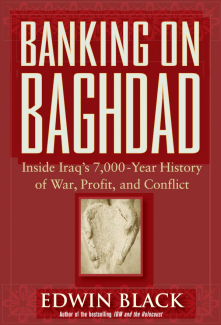